In this high altitude balloon testing chart from spaceweather.com, you can see that cosmic ray intensity has hit historic high levels in 2018. One of the effects of increased cosmic rays is the upper atmosphere high speed jet streams at the North and South Poles start to wander more frequently from their normal relatively stable course.

As the Northern Hemisphere jet stream wanders South, it draws cold Arctic air with it, and on the other side of this much warmer tropical air can be drawn from the tropics much further North.

In this image you can see what a stable jet stream looks like compared to a polar vortex event. 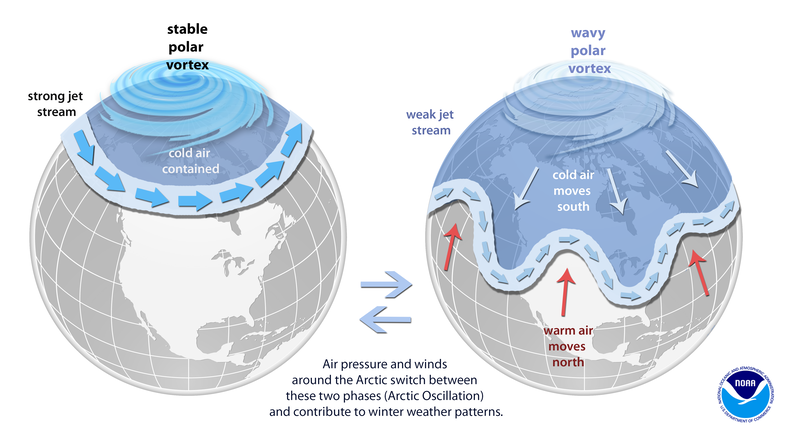 During a polar vortex event, a country as large as the US could have part of the country experiencing a heat wave, while the other part will be experiencing record cold temperatures.

This image shows how a solar vortex can create enormous temperature differences. Where the very hot and very cold air masses meet, you will see extreme weather events occur.

Grand Solar Minima are historically associated with dramatic weather events. Examples are massive hail events, a year or month's worth of rain falling in a day, record snow, record hot and cold temperatures, plus way above the normal number of lightning strikes during storms. Tornadoes can appear in regions where you would not expect to see them. Deserts can see massive flooding or even snow, while other areas that are normally wet can experience droughts.

These earth changes happen so quickly and dramatically that farmers can't cope. This leads to massive crop losses, as we can see presently occurring on the worldwide crop loss map below. Click the map markers to get report details. These worldwide crop losses have been created by rapid and dynamically changing weather conditions, cold, heat, flooding, snow, hail and drought etc., over the last 12 months. As we go deeper into a Grand Solar Minima, crop losses will intensify, because of an increasing number of volcanic eruptions and earthquakes that are also triggered by the increasing cosmic rays intensity.

Most governments are not up to speed on this new dynamic, and this will lead to a lot of people dying and worldwide instability because there have not been significant preparations put in place. We know what happened in the past during Grand Solar Minima. It is all there in plain sight in the historical record for anyone who takes the time to do some basic research on the subject.

<<< Back to Earth Changes Article

Disclaimer: This is an amateur volunteer run service. Human error can provide incorrect information, and equipment malfunction can produce false readings. Do not rely on, or take action upon information presented on this web site, without further research. Views expressed in the pages or images on the SCCC Inc., site maybe the personal opinions of the relevant writers, and are not necessarily representative of those of SCCC Inc.

This site uses Akismet to reduce spam. Learn how your comment data is processed.

Subscribe for Periodic Alerts & Updates from The Food Lab on Radiation Contamination Testing in Food and the Environment
Please Ceck Your Email after Subscribing to Validate your Email Subscription.